From soon after the introduction of the Praktisix, a non-metering prism  was available, and with slight variations this continued to be available for the Pentacon Six, so plain prisms are not difficult to find.  A few years later, an improved version of this prism was produced: a coated condenser lens on the lower part of the prism was apparently intended to brighten the viewfinder image substantially, although I cant see any difference  whether with the standard focussing screen in the camera or the much brighter Rollei screen!

It is easy to spot whether the prism is of the older or newer design, by looking at the button on each side of the prism that locks it onto the camera:  the original design has silver (bright aluminium) buttons, while the newer prism has black ones.

The prism on the Norita 66 seems to me largely inspired by the shape of this prism  although there are of course obvious constraints on the possible shape of pentaprisms.  To see a comparison of the Pentacon Six and the Norita click here.

If you can find one and like using a separate meter, it is a very good option for your Pentacon Six.  You can even close the top of the Pentacon Six case with the Kiev plain prism in place!

Exakta produced a very smart low-profile non-metering prism for the Exakta 66.  This is on rare occasions offered on the internet.  Inside, it contains what looks like an unmodified Pentacon Six plain prism.

These prisms have a mounting socket often referred to as big ears, because of the shape of the bayonet mounting on the accessories.  You can see that mount on an accessory here.


This mount can be found on the later prisms that were produced for PRAKTINA 35mm cameras, as well as on Praktica 35mm cameras in the 1960s.

Arsenal have manufactured a small and light-weight non-metering prism for the Kiev 80/Kiev 88/Salyut (also marketed in the U.K. as the Zenith 80), and some users love it, but it is not easy to find one.

Note that this prism is labelled Made in Ukraine, which dates the label, at least, at after the dissolution of the former Soviet Union.  Plain prisms do not have a serial number, which  in the case of FSU products  normally indicates the year of manufacture.  Like the Hasselblad NC-2 prism, the Arsenal plain prism provides 3× magnification of the focussing screen image.

In 1968 Pentacon introduced a TTL meter prism for the Pentacon Six, which was henceforth called the Pentacon Six TL.  This extremely reliable and easy-to-operate prism provides both full aperture and stop-down metering, though I consider that using the stop-down approach is much easier and faster to use.  The meter is not coupled to lens aperture or shutter speed.  It is criticised by some for not being very bright, although I find it more than adequate when used with the Pentacon fresnel screen or the Rollei screen.  It is also criticised for having too wide a safety margin; it just doesnt show enough of the image on the focussing screen.  However, one adjusts to this, and if one composes tightly, the resulting extra fraction round the edges of the image is rarely a problem, and does at least allow for photo processors who are often not very accurate when framing the negative to be enlarged, or when trimming the prints.

You can find instructions on how to use this prism here.

The Kiev 60 TTL prism is also totally uncoupled, but has two advantages over the Pentacon Six prism:

You can find instructions on how to use this prism here (scroll down).


The aperture selected is visible in the viewfinder, and also on the top of the finder, if you prefer to look there, and + and - signs show whether you are under- or over-exposing.  A O indicates correct exposure.

It is not possible to mount either of the Exakta 66 prisms onto the Pentacon Six.

You can find instructions on how to use this prism here and more information on how it works here.

See details of this here (scroll down).

Relationship between viewfinder image and image on film, print or screen

The Pentacon Six (and therefore also the Exakta 66) prisms (both metering and non-metering) are sometimes criticised for not showing the whole of the image area.  For a detailed analysis of this, click here and scroll down to the bottom of the page.  Interestingly, the Pentax 6×7 prism is criticised for exactly the same failing on the Luminous Landscape Review, which states that

Arsenal Kiev has produced two metering prisms for the Kiev 88.  Both metering prisms operate essentially in the same way as the Kiev 60 prism, and therefore they are not coupled to the lens aperture nor to the body shutter speed.  Only the shape and the mount are different from the Kiev 60 prism.  Both Kiev 88 prisms are (approximately) 45° prisms, and I find both of them very comfortable to use.   They offer stop-down metering only.

They also have the advantage of fitting Hasselblad cameras. 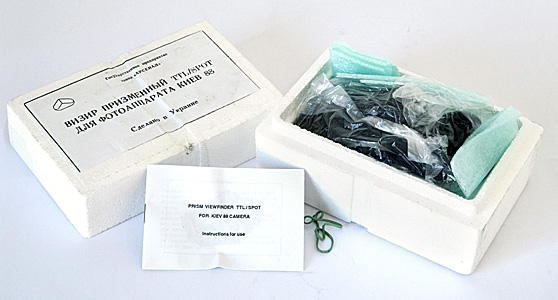 The same as the plain prism, the spot prism is supplied new in a moulded polystyrene box,
along with a protective base plate and a rubber eye-cup.
One must assume that money ran out before the manufacturer could make a box to take this!
At least the instructions are now in English instead of Russian.
[spotpack.jpg]

What do they weigh?

Here are the weights of the prisms for the Pentacon Six, Kiev 60 and Exakta 66, with the Norita prism weights added for comparison purposes:

The Kiev 60 prisms are shown with and without the Baierfoto adapter (see link below) so that their comparative weight if used on the Pentacon Six can be evaluated.

Important note: I do not have scientific scales; all items are weighed on domestic kitchen scales and are valid for comparison purposes only.  You may obtain different weights with different scales, or with different examples of these items.

What a pity that these prisms and waist level finders are not interchangeable between the different cameras!
But now they are!  See the section on other accessories


To go on to the next section, click below.
Next section (Viewing Aids)