Review of the 500mm Tele-Noflexar Lens 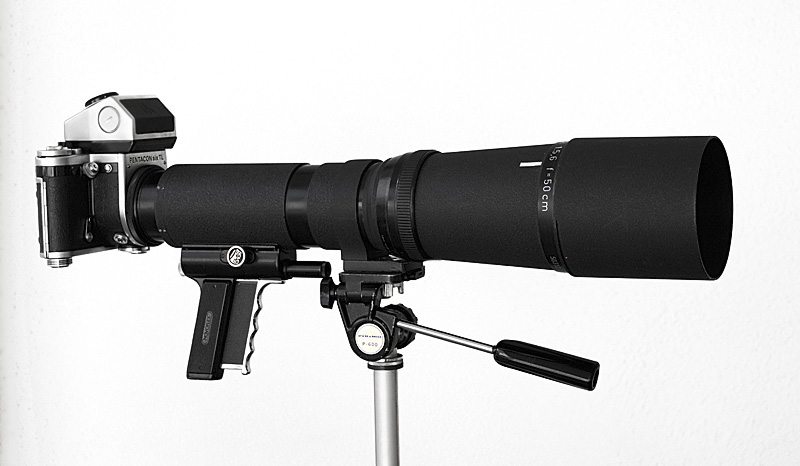 The Tele-Noflexar mounted on a tripod.
Note that I have had to use the tripod platform back-to-front,
in order to prevent the tripod pan and tilt lever from fouling the Novoflex pistol grip.
[novo500.jpg]

The Tele-Noflexar is supplied with a lens hood with a bayonet mount that enables it to be put in place extremely quckly and easily.  It is a long, straight tube, and is mounted onto the lens in reverse position for storage.  A screw-in metal front lens cap is also provided.  A standard plastic rear cap covers the back of the focussing grip in which most users will store the 500mm lens head.

This is manual aperture lens: there is no auto diaphragm stop-down operation, nor even a “pre-set” lock, in contrast to the pre-set lenses from Meyer-Optik and some other manufacturers; however, there are détentes at each full stop position, so you do not need to be looking at the aperture ring; you just count the clicks to stop down:

Having squeezed the focussing trigger to achieve the desired focus, you can lock it in place with the other hand, using a locking knob which is situated on each side of the lens to enable operation with either hand.  Then you need to stop down and then fire the shutter.  With three things to do and only two hands, you can choose which two are critical in the particular shooting situation:

Of course, especially with the 500mm lens hand-held you would be advised to use a shutter speed of at least 1/500 sec and – depending on the sensitivity of the film and the prevailing lighting conditions – you might need to work at maximum aperture, in which case you only have two things to do, and operation is easy and fast.  You can easily adjust the focus constantly as required and fire the shutter at the decisive moment.

Novoflex made a point of stating that these lenses were indeed designed to be used at maximum aperture.


As stated in the review for the 240mm Noflexar, focussing with the pistol grip is much faster and easier than by rotating the grip on a standard focussing helical ring, as is found on most lenses, and can be continuously varied as required when tracking a moving object such as a bird or other wild life – or even a footballer or players in other sports, cyclists, car or horse races, etc.  For all of these subjects, and many others, the 500mm Tele-Noflexar is ideal. 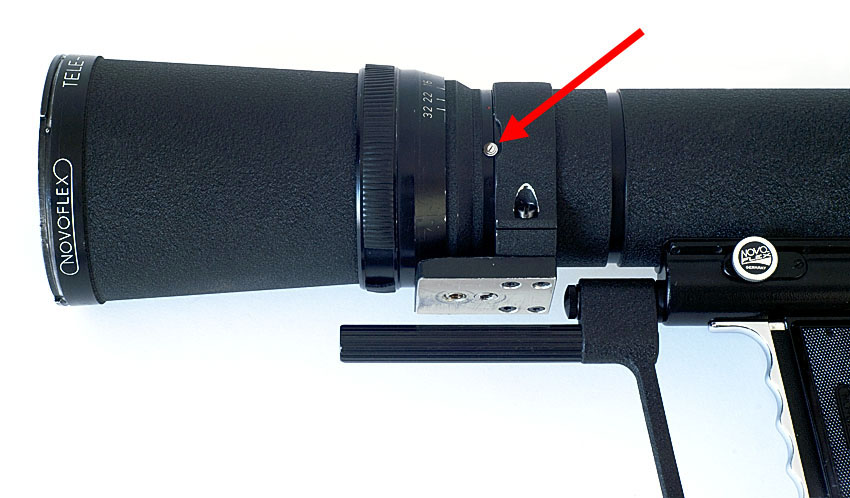 The lens head is released from the pistol grip by pushing the little arrowed button forward
and then rotating the lens anti-clockwise about 1/6 of a turn to remove it from the bayonet mount inside the pistol grip.
[11122215.jpg]

If swapping the two lens heads, it will be necessary to re-focus, even if the lens pistol grip has been locked onto infinity with the previous lens.

Some 50 or more years after manufacture, the lens is optically as good as new, as are the aperture blades.  The metal parts of the lens barrel also show minimal signs of wear - an indication of the quality of manufacture and the care taken by the previous owner(s).  However, the rubber ring that is recessed into (and extends above) the aperture control ring is beginning to perish in some places, as may be visible in the above two photos.  (Look at the underside of the lens, where there is a missing section of rubber, and one end is coming away.)  Fortunately, it is possible to obtain suitable replacement material for this, but I wanted you to see the original before I changed it.  I notice from the images received from Novoflex in 2016 that later versions of this lens head did not have the rubber-covered aperture ring but a ring in fluted metal (with narrow, straight, longitudinal cuts in the metal) – see first and third images here.

A possible defect in some situations is the limited minimum focus.  I have measured the minimum focus with the 500mm head and the standard rifle stock at 12580mm, measured from the focal plane of the Pentacon Six.  That is over 12½ meters or a little over 41 feet!  Gillespie gives the distance as being 38' 9", which probably comes from Novoflex literature.  That will be fine if you are at one goal mouth shooting the action at the other goal, or of course in many wildlife or celebrity shoots.  However, it is not a lens designed for use indoors.


To go back to the review of the 240mm Noflexar, click here.

To return to the overview of Novoflex lenses, click here.

To go on to the next section, click below.
Next section (Rodenstock Imagon lenses)