The following standard focal length lenses were included in the test:

These lenses are illustrated here, along with the top standard lens produced for the Exakta 66, the Schneider Kreuznach Xenotar MF 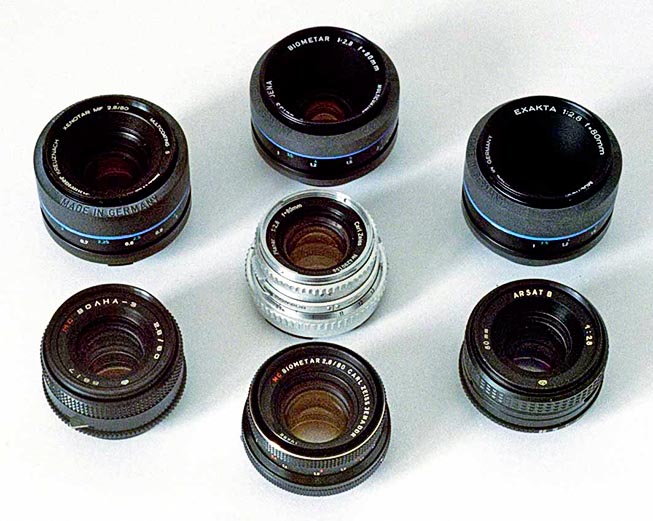 Some of these lenses were also tested with an appropriate 2× converter. For ease of comparison, I am including the results of these shots in the section on 150-160mm lenses.

For more information on the versions of the 80mm Biometar in Pentacon Six design, see here.

For more information on the 80mm lenses available in Exakta 66 design, see here.

In spite of the difference in focal length, I’ll start with the standard lenses, and report on the zoom immediately afterwards.

The order in which I am describing these does not indicate any hierarchy of quality.

I will start with the Volna 3 lens.  At full aperture the narrowness of the depth of field is of course very obvious, so a large part of the picture looks extremely soft.  This is of course an optical fact, not a defect, so I must concentrate on the plane of the image that was focussed on.  I would still describe this as disappointingly soft, even close to the centre of the image (the cream-coloured sign to the left of the title “The Tea & Coffee House”).  The Arsat B is equally soft at full aperture.  To be fair, I would have to mention that taking pictures at full aperture in bright overcast conditions proved difficult: the exposure meter indicated f/4 at 1/1000 sec, and as I didn’t have any ND or polarising filters with me, I had to over-expose by one stop in order to test f/2.8, so the film is not performing at its best, either.

At f/2.8 the Exakta lens is no better than the Volna and the Arsat.  My impression is that off-centre the Exakta is marginally less sharp than the Volna and the Arsat, but there is very little to it.  The Biometar, original version, is sharper than any of the above at f/2.8, and the further from the centre of the image one looks, the clearer is the difference.  So this looks like the best of the standard lenses so far.

With the meter reading f/4 at 1/1000, and a maximum shutter speed of “only” 1/500 on the Planar lens, the correct aperture would have been f/5.6.  As with some of the other shots, I deliberately over-exposed by one stop, this time in order to test the lens at f/4.  To test it at f/2.8, I would have needed a slower film or an ND filter.  So the comparison is not quite fair.  However, I also took shots at f/4 with some of  the other lenses, so how do they all compare?

Firstly, the Planar at f/4 is – not surprisingly – clearly MUCH sharper and contrasty than any of the other lenses at f/2.8.  Stopping the Biometar, Pentacon Six multi-coated  version down to f/4, it looks every bit as sharp and contrasty as the Planar at the same aperture, right into the edges, using a 7× loupe on an 8 × 8 print.  A tiny variation in print density has been introduced by the lab, but this is not visible on the negative.  To my surprise, the shot taken with the Biometar in Exakta 66 finish at f/4 is not as sharp as the Biometar in Pentacon Six finish.  I wonder if this is due to a slight focussing error on my part???

At f/5.6, the Pentacon Six Biometar is critically sharp into the corners.  (I didn’t test the Exakta 66 Biometar at this aperture; I set out to compare the lenses at maximum aperture and f/11 only.)  The Exakta lens is equally sharp, with perhaps slightly more contrast than the Biometar.  The result is definitely outstandingly good.  The Volna 3B at f/5.6 is as good as the Biometar.  The amount of detail resolved is incredible.  I didn’t test the Arsat lens at this aperture, but at other apertures it seems indistinguishable from the Volna.

Now on to the next aperture that we set out to test: f/11.  Here of course the depth of field increases dramatically, bringing the cobblestones in the foreground into sharp focus, which gives the impression of a sharper image – though what counts is the result in the plane that we actually focussed on.

Not surprisingly, all the standard lenses produced superb results at this aperture.  The Planar is truly excellent.  But I will run out of superlatives.  Studying the definition at the very edge of the frame in comparison with the modestly-priced Exakta, I can’t see any difference – although some of the shop signs look sharper with the Exakta.  These pictures were taken at 1/125 sec on a tripod, so I think that camera movement and other variables have been reasonably eliminated.  (OK, the quality of the daylight or even the purity of the air could change, but with the bright overcast conditions any variation in brightness was not detected by the TTL meter, and the traffic flow round the square was very light.)

The Biometar in Exakta 66 livery looks as sharp as the Planar, until I take my 7× loupe to the two of them.  Then it becomes clear that the Biometar is fractionally sharper than the Planar at the edge of the frame.  The Biometar in Pentacon Six style is indistinguishable from the Exakta 66 version, and I am convinced that the difference between them at maximum aperture must be down to a slight focussing error – I should have used a focussing magnifier on the prism, or the magnifying head.

The Volna 3 and the Arsat B are virtually indistinguishable from each other at f/11. (The Arsat is possibly almost immeasurably sharper than the Volna, looking at the red “Peter Briggs” sign with the black lettering “Clarks” on a white background, but I am not certain.  Hazy shadows on the ground reveal that there was slightly more brightness through the clouds during the Arsat shot than during the Volna shot, and this probably accounts for the tiny difference.)  Both of these lenses are the tiniest fraction behind the Exakta at the very edge – though it takes the 7× loupe and direct sunlight on the print to show this.

Seeing as at f/11 the Exakta seems sharper than the Planar, and the Biometar seems sharper than the Planar, which if them is better?  As I examine my 8 × 8 inch prints now, the sun is still shining on them, and with the 7× loupe again I can’t distinguish any difference.  Please believe me, I did not set out to demonstrate this.  Nor did I expect it.  I expected the Planar to come first, the Biometar to come second, and the others to come in somewhere behind them.  From the few prints that I have scanned in with my modest scanner, I can’t see these differences on the screen; one hits pixellation before seeing this degree of detail.  (This is not surprising, considering what I discovered several years later about the "Exakta" lens – see here, near the bottom of the page.) 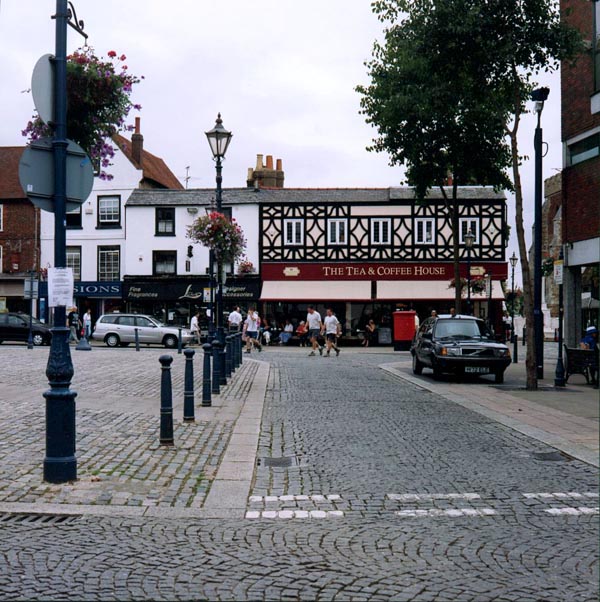 The conclusion is that they all perform superbly, especially at the apertures that we use most of the time: f/5.6 - f/11.  But I’m glad to have done the tests.  It’s good to know what we can trust our standard lenses to deliver the goods.

For most of the pictures in these tests that were shot in Hitchin market square, the lenses were focussed on or near infinity, but how does the standard lens of the Pentacon Six, the 80mm Biometar, perform at its closest-focussing distance?  The following picture was an unplanned shot that was taken when we stopped for a snack while we were in the small German town of Zwönitz.

The Biometar and Bokeh

Further results with two different Pentacon Six 80mm Biometar lenses are reported on here.  These show how out-of-focus highlights – known as "bokeh" – are rendered by the lens when it is used at wide apertures.

Since completing these tests I have bought the Joseph Schneider Kreuznach Xenotar MF 80mm f/2.8 lens, reputed to be every bit as good as the Carl Zeiss Oberkochen Planar.  I have used it for regular photography, without carrying out specific tests, and it certainly yields outstanding results.

The 75-150mm Variogon has a maximum aperture of f/4.5.  Here I am just looking at it at its 75mm setting.  Fully open, this lens produced an image that was virtually indistinguishable from the Exakta at f/5.6 (remember, that was extremely sharp and contrasty).  At f/11 the depth of field has obviously increased considerably, bringing the foremost cobblestones into focus.  Apart from that, there is perhaps a tiny increase in contrast, but that could just be down to the marginal difference in the density of the two prints produced by the lab. 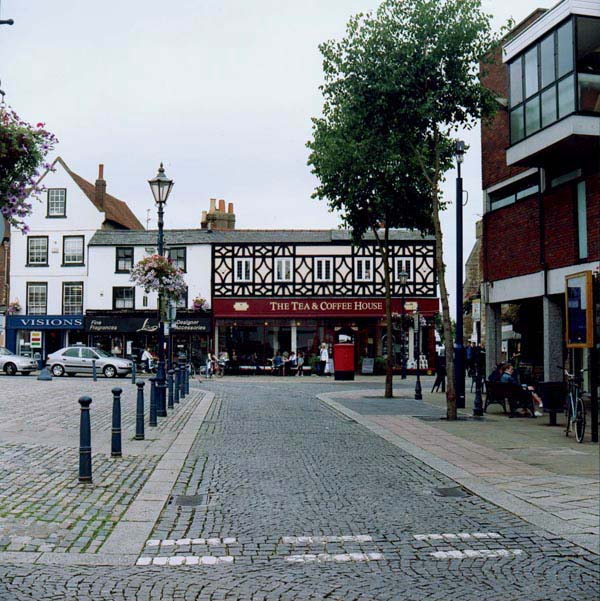 If you can find a 75-150mm Variogon, and don’t mind its cost or the weight of carrying it around with you, it is clearly a very acceptable alternative to any of the standard lenses described above – not to mention the other focal lengths that it covers.

On to the telephoto lenses

Back to beginning of lens tests